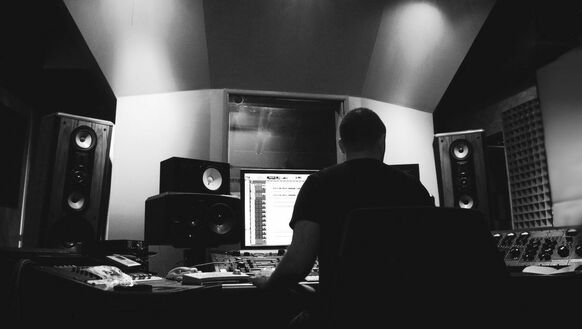 Jamie started working in local studios (West Sussex, UK) at an early age, firstly as a session musician (drums) and then assistant engineering in sessions.

He went on to study Music Technology at Chichester College & Commercial Music at Westminster University, London.

In 2004 Jamie opened his first recording studio in his home town of Chichester in the UK. He produced artists, taught music and supervised rehearsal sessions at his facility for 5 years.

In the autumn of 2009 Jamie moved to New York City. He engineered and produced artists and bands at Hole in The Sky Studios, Threshold Studios and Mercy Sound.

In the summer of 2016 Jamie opened 'Albion', a production studio in Langhorne, PA. He still records and mixes in studios across NYC.

In 2018 Jamie augmented his recording setup with a rig capable of recording high quality interviews on location. Most notably at press junkets with Natalie Portman (Vox Lux) and Lucas Hedges (Boy Erased).